Two hugely talented young artists, Jonathan Radford saxophone and Christine Zerafa piano, supported by the Countess of Munster Musical Trust, got the 2018-19 season of Chipping Sodbury Music Society off to a flying start. Praised for his “exceptional musicianship and emotive playing", saxophonist Jonathan Radford is the 2018 Royal Over-Seas League Music Competition Gold Medallist and first prize winner. Christine Zerafa accompanied him on piano during his prize-winning performance in June at the Elizabeth Hall, South Bank, London.

A wide-ranging programme started with Debussy’s Rapsodie for alto saxophone and piano, one of just a few classical compositions written for saxophone. The differing moods, both passionate and relaxed, were well captured. A Chaconne by Vitali proved an attractive work. Technically demanding it gave the piano equal prominence. Rachmaninov’s Vocalise has received many transcriptions over the years. This melodious work with its Russian flavour was well received. Grieg’s Sonata no 1 brought the bracing air of Norway into the hall.

The Suite Espanola by Albeniz, with its infectious Spanish rhythms, showed the close rapport between the artists. Perhaps the highlight of the evening was a piece by Vivancos illustrating a mosquito flying around until it is squatted. The effects achieved on the saxophone were truly amazing. Piazolla’s Histoire du Tango traced its development from 1900 to 1960. The final work, Gershwin’s popular Rhapsody in Blue employing the soprano, alto and tenor saxophones, saw both players enjoying the jazz elements in this piece.

A total mastery of their instruments beckons a bright future for both artists.

"Thank you so much again for your inviting us to play for the Chipping Sodbury Music Society on Tuesday evening, both Christine and I had a wonderful time performing for you. Please do pass on our thanks to everyone involved in making the concert a success and I wish you all the best for the upcoming season."

This concert was sponsered by the Countess of Munster Musical Trust 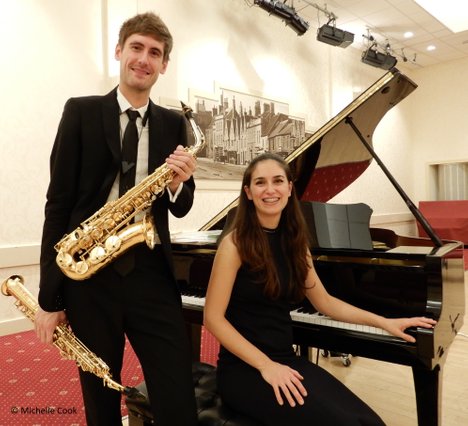 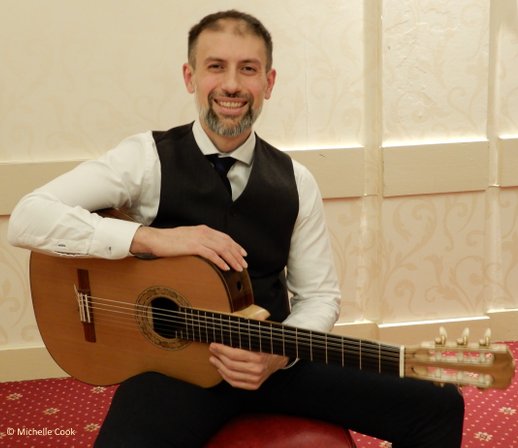 Warm Sounds of the Guitar

Andreas Moutsioulis, a Greek born guitarist, made a welcome return to the Chipping Sodbury Music Society for the November concert. In his very successful career he has been a prize-winner in many international competitions and has performed in Europe and the USA.

In the opening work “Songe Capricorne” by Dyens a delicate touch was much in evidence. Leo Bowers’ “A Day in November” with its subtle melancholic theme was beautifully realised. An Argentinian folk song “Alfonsina y el mar” by Ramirez enjoyed a delightful rhythmic drive. Closer to home was John Lennon’s “Yesterday” and Paul McCartney’s “Fool on the Hill”. These familiar works were savoured by soloist and audience alike.

Three Greek songs by Theodorakis, arranged for guitar by the soloist, were melodious and atmospheric; “Amelia” by Kristianto was given its first public performance in a guitar arrangement. It proved a particularly poignant piece. Two works by the popular Argentinian composer Piazolla showed both his sad nostalgic side and his spicy tango rhythms. “Memories of the Alhambra” by Tarrega is a technically challenging work but the special tremolo effect was carried off with great aplomb.

What a pleasure it was to hear the guitar caressed and employed in music which demonstrated the full range of this versatile instrument.

"We really enjoyed the concert and so glad the audience did too!"

Listen to the encore given by Sophia and Sergey at the end of their concert on December 4th. 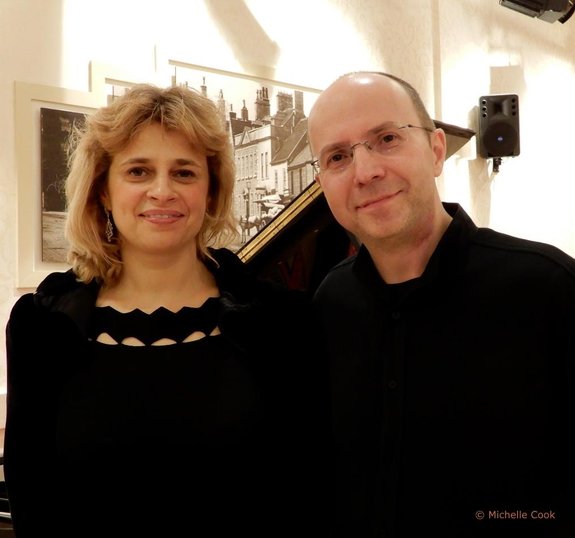 The December concert of the Chipping Sodbury Music Society saw the welcome return of pianist Sophia Lisovskaya, this time accompanied by her Russian compatriot violinist Sergey Levitin. Both artists are recognised worldwide for their artistry and have recorded for the Signum and Dutton Epoch record labels.

Their popular programme had a predominantly Russian and French flavour. Russian favourites included Tchaikovsky’s Dance of the Sugar Plum Fairy played at an ideal tempo which brought out both the colour and perky rhythm of this piece. Prokofiev’s march from The Love For Three Oranges emphasised the grotesque drama.

Claude Debussy was well represented in his anniversary year. Clair de Lune was given a gentle treatment with real pathos. His decadent waltz La Plus Que Lente was attacked with great vigour and Prélude à l'Après-Midi d'un Faune successfully conjured up visions of a languid sultry afternoon. Massenet’s Meditation from Thais was sweetly but passionately done, with fine interplay between the players.

The second half opened with the Rosenkavalier Waltzes by Richard Strauss. These delicious confections were played with great charm. George Gershwin’s Summertime and It Ain’t Necessarily So illustrated well swinging 1920s America. Mascagni’s popular intermezzo from Cavalleria Rusticana was given a lyrical and relaxed interpretation.

The best tunes from Bizet’s Carmen ensured a thrilling finale to a well-received concert. An encore of Holy Night, Silent Night was suitably festive. 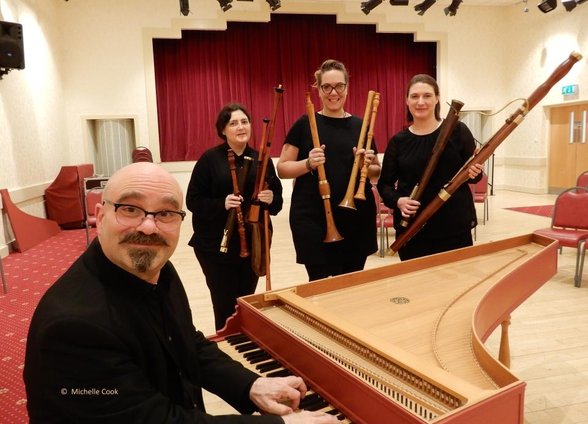 A musical blast through the centuries

The February concert of the Chipping Sodbury Music Society welcomed Syrinx, an ensemble dedicated to the performance of historical reed instruments. Belinda Paul, shawm, dulcians, bagpipes and oboe; Ann Allen, dulcian, voice and oboe; Sally Holman, dulcian and bassoon and Dan Tidhar, harpsichord and organ, gave a fascinating programme tracing the development of reed instruments from the 14th century to the Baroque era.

The shawm and dulcians, predecessors of the modern oboe and bassoon, were originally imported into Europe from the middle East and this gave the music by Bologna, Landini and Machaut a decidedly Oriental flavour.

A simplified earlier version of the bagpipes was found throughout Europe in the 1300s, well before the familiar Scottish version became established. This instrument added a certain piquancy to the music of this period and Belinda Paul took delight in showing off its many properties.

More familiar was the early lightweight organ, far removed from its gigantic Victorian successor, and the harpsichord, forerunner of the piano. Dan Tidhar played both instruments with great sensitivity in works by Purcell and Telemann.  Ann Allen’s vocal contributions added to the medieval atmosphere redolent of feasting and courtly entertainment.

In the second half a Vivaldi Sonata brought the audience on to much more familiar territory.  The allegros were played with great rhythmic drive and the largo was given a rapt, romantic treatment.     A sonata by Mercy saw Sally Holman bring out the soulful quality of the bassoon to perfection.

The high Baroque style was well-illustrated by Roman’s Sonata for oboes, bassoon and harpsichord.  The dreamlike andante was truly memorable.  An encore by Handel ended the concert which was both educational and wholly enjoyable.

. . . to see all those young people enjoying playing their musical instruments, performing wonderful musical pieces and to an extremely high standard really did lift our spirits.

The musical directors of each of the seven groups of young musicians deserve many congratulations as well as, of course, the musicians themselves. The young people were watching their conductors to such an extent that the way they finished each piece was as accurate as their beginnings. They looked as if a very high standard of playing the music was really important to them. The students concentrated so hard as they played! 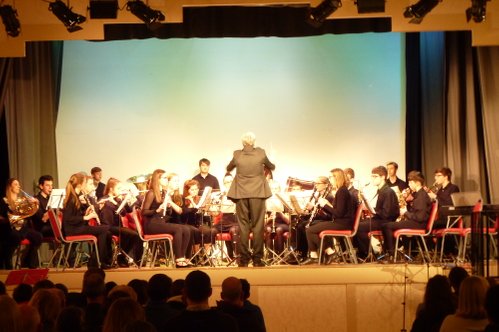 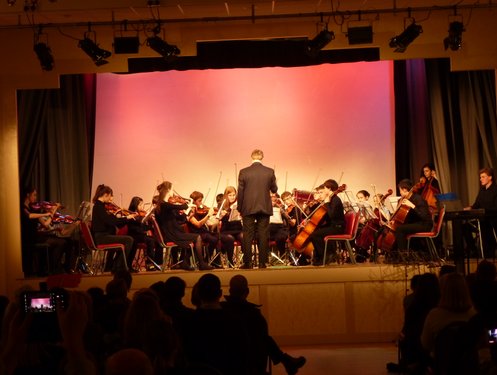 "In tune with children and young people .. ."

is alive and well. The March concert of the

Chipping Sodbury Music Society, given by the

musicians from all over the area. Their

professional and enthusiastic application was

enjoyed by a packed hall, with many proud

parents in the audience.

Symphony No 35. This very demanding piece

was played with great assurance.

Kingswood’s Don’t Fret, made up of guitars and double bass, revealed a delicate touch and great restraint especially in the andante from Vivaldi’s concerto, which was originally for 2 mandolins.

Flutissimo, an advanced group of flautists, engaged in modern works by Catherine McMichael and Samantha Cox. The high standard of playing was remarkable with good intonation and coordination throughout.

The Kingswood Wind Orchestra excelled themselves in The Tempest Irish Tune from County Derry and the finale from Stravinsky’s Firebird.

Little Stoke Western Winds brought out the humour of A Stroll in the Park and the clap-along Build me up Buttercup.

The South Gloucestershire Youth String Ensemble played a typical tango by Piazolla with fine rhythmic control, and the stately Pavane from Warlock’s Capriol Suite was given its full English flavour.

This annual event once again was a tribute not only to the players but also to the teachers, conductors and organisers involved in the South Gloucestershire Music Hub. 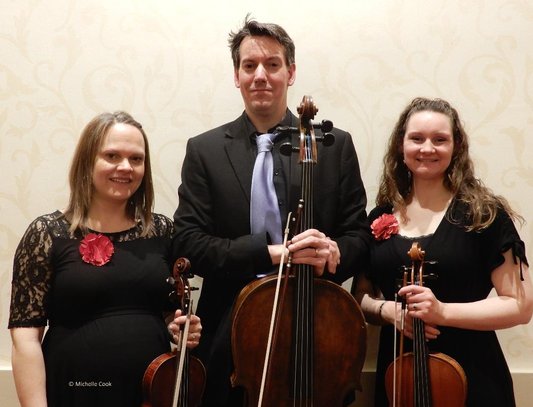 Schubert’s delightful Trio D471, composed originally for his group of personal friends, provided plenty of light and shade and was both light-hearted and full of happiness.

Beethoven’s String Trio Opus9 No1 written early in his career was a more substantial work. The players were all given ample opportunities to shine, particularly in the soulful adagio and perky finale.

Dohnányi was a major figure in Hungarian musical culture and his Serenade for string trio was very much in the folk music idiom. Technically demanding, with irregular rhythms, the many challenges were met with evident enthusiasm.

The enthusiasm of the audience was rewarded by two encores to end a thoroughly enjoyable concert.

Programme of concert on May 7th

"Just another thank you for the concert at the Music Society. We really enjoyed it." 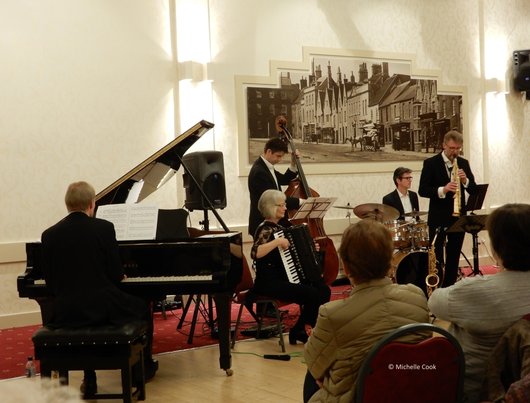 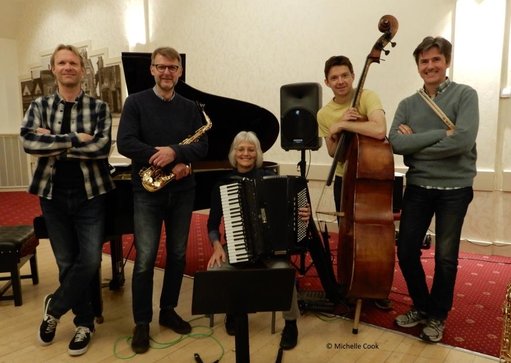 From Buenos Aires to Chipping Sodbury - Tango Came to Town!

Argentinian composer Saúl Cosentino very generously sent Karen Street some of his music after hearing her play some while ago. She was so enthused that she formed her ideal Tango Band to play his music, to explore other Tango inspired composers and to write for the band herself.

Chipping Sodbury Music Society was able to enjoy the fruits of Karen's labours at their final concert of the 2018-2019 season.

Jonathan Taylor, piano, gave the audience an insight, from his piano stool, into the bandoneon (a type of concertina particularly popular in Argentina and Uruguay), the leading exponent having been the tango composer, Astor Piazzolla. They were essential instruments in most tango ensembles in the early 20th century.

Dave Manington, double bass, was able to showcase his musicianship with his own composition “Hullabaloo”.

Rob Millett, percussion and vibes, also introduced the audience to the vibraphone technique of using two cello bows to achieve sustained tones on the tuned metal bars. The instrument is usually played by striking using two or four soft mallets.

Andy Tweed performed several pieces on his favourite tenor saxophone, but also demonstrated his skill on the soprano saxophone, as well as duetting with Karen Street.

The evening's concluding piece was a Brazilian tango, "Escorregando" by Ernesto Nazareth.

The South American flavour was evident in all the pieces played and gave ample opportunity for all the soloists to shine. An enthusiastic audience had been treated to an evening of truly professional music making at the highest level.

Carismático is the brainchild of Karen Street who is known as one of the UK’s leading accordionists. She was contacted by Argentinian composer and pianist, Saul Cosentino, back in 2016 asking her to look at some of his compositions. This led Karen to create her ideal Tango band to perform his brilliant, emotionally charged compositions. She has added to the group’s repertoire with arrangements of classic Astor Piazzolla and her own creative and nuanced compositions.

"Having my own Tango Band is something I have thought of creating for many years. By chance Argentinian Composer and Pianist, Saúl Cosentino made contact and very generously sent me some of his music to play. I was so enthused I knew I had to finally put together my ideal Tango Band to play his music, explore other Tango inspired composers and write for the band myself".