A saxophone and harp might seem an unlikely combination of instruments but Huw Wiggin, one of the most popular saxophonists of his generation, and award winning harpist Oliver Wass showed at the October concert of the Chipping Sodbury Music Society that the results could be quite magical.

An Arabesque and Prelude by Debussy evoked the sultriness of a hot summer’s day. A Bach Sonata seemed newly minted. A selection entitled Around the Clock showed that in the right hands the harp can play jazz as well as any guitar.

Chant du Menestrel by Glazunov was full of plaintive nostalgia. By contrast De Falla’s Spanish Dance gave the harpist ample opportunity to show off his amazing dexterity. Two Songs by Gershwin were achingly beautiful in a special instrumental arrangement. The concert ended with variations on the well-known theme from Carnival of Venice. The artists had great fun with their homespun interpretations.

Comments by members of the audience as they left were uniformly of praise for a wonderful concert given by artists at the very top of their game. 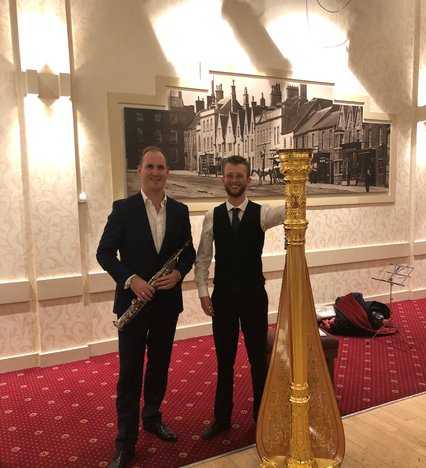 At the November concert of the Chipping Sodbury Music Society guitarist Michael Butten proved a highly successful short notice replacement for fellow musician Giacomo Susani, who had been struck down by illness.
The help of The Countess of Munster Musical Trust in this rearrangement was invaluable.

By contrast modernist Roberto Gerhard’s Fantasia required a contemporary approach. An arrangement of Bach’s Violin Sonata no 3 showed this music in a new light.


The soulful adagio was followed by probably the longest fugue ever written. The soloist obviously enjoyed the challenge.

A Fantasia by the little-known composer Luigi Legnani proved to be a very attractive composition, written in an operatic style, and was both tuneful and humorous.

Benjamin Britten’s Nocturnal after John Dowland gave the soloist opportunity to show off the huge range of expression achievable on the guitar.
An enthusiastic audience had enjoyed a highly satisfying evening.