In 1947 the Downleaze Music Club was founded by a group of music enthusiasts to encourage the appreciation of music by means of illustrated talks, lectures and gramophone recitals.  Over the following years the club developed and prospered so by the 1960s live concerts were introduced.  Supported by local financial assistance and sponsorship, musicians of considerable talent and acclaim were engaged and the club gained a reputation for promoting music concerts of the highest quality and excellence.

In 1990 the Downleaze Music Club changed its name to Chipping Sodbury Music Society, attracting members and sponsorship from a much wider area. It also enhanced its reputation by promoting concerts given by artists of international renown and by engaging young talented musicians at the beginning of their careers.

In the 21st century the objective of the society is no different from that of those enthusiasts who met seventy years ago “... to bring together lovers of good music and musicians in a friendly and convivial atmosphere...”

Chipping Sodbury Music Society presents seven concerts in Chipping Sodbury’s Town Hall (unless otherwise stated) from October through to May and all concerts commence at 7:30 pm. 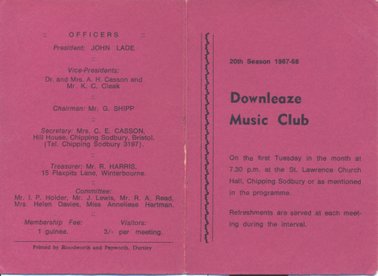 Chipping Sodbury Music Society is grateful for the generous support given by:

The Countess of Munster Musical Trust