The Chipping Sodbury Music Society final concert of the 2015-2016 season welcomed Andreas Moutsioulis, locally based and internationally acclaimed guitarist.  What a treat it was to hear this often abused instrument caressed with a gentle touch.

‘Sevilla’ by Albeniz, based on Spanish folk tunes, was full of light and shade.  An affectionate approach to Brouwer’s ‘A Day in November’ brought out the delicacy and melancholy in this work.

‘Asturias’ by Albeniz showed off the sheer dexterity of the artist in a piece suggesting the footwork of a Flamenco dancer.

This well received programme proved a fitting end to a successful season. 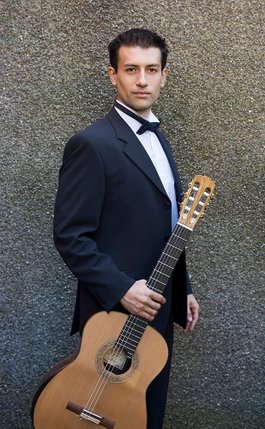 The programme got off to a good start with a wind quintet by Gustav Hoist. This long lost early work encouraged sensitive playing in the poignant slow movement and lively rhythmic attack in the finale.  Claude Arrieu’s quintet was very Gallic in flavour with perky playing in the allegro and much humour in the third movement.  Sir Malcolm Arnold’s three shanties for wind instruments, based on British sea songs, was a rousing piece enthusiastically conveyed by the players.

Works by Milhaud Poulenc and Ibert full of chromatic harmonies and variations in tone colour brought to mind a bustling pre-war Paris of street cafes and leafy boulevards.  The final piece, popular extracts from William Walton’s Facade Suite, reflected the new jazz style of the 1930s with the Swiss Yodelling Song and Popular Song hugely enjoyed by both audience and players.  A fine concert had reaped many rewards. 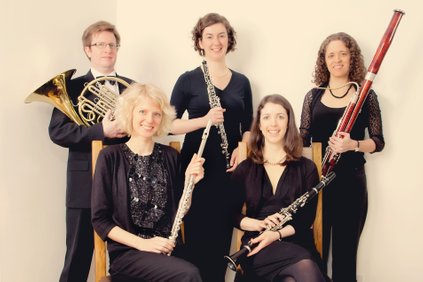 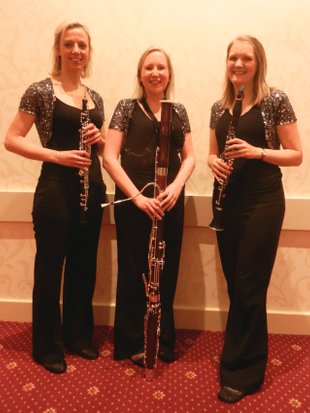 The first half featured music by Bach, Schubert, Ibert, Telemann and Beethoven. Bach’s three sinfonias were well integrated and Schubert’s Trio was a youthful composition relished by the players.  Ibert’s five pieces based on French folk music had a refreshingly Gallic flavour.  Telemann’s Fantasia for solo oboe demonstrated the full range of the instrument. Beethoven’s variations on a popular German theme were played with enthusiasm.

Mozart’s Divertimento no. 2 which followed the interval was a typically melodious work with jolly fast movements and graceful minuets and trios.  Solos for clarinet by Bela Kovaks and bassoon by CPE Bach were played with great eloquence.  Stefan de Haan’s Divertimento on some familiar folksongs proved a fitting finale to a well received concert by a highly talented trio. 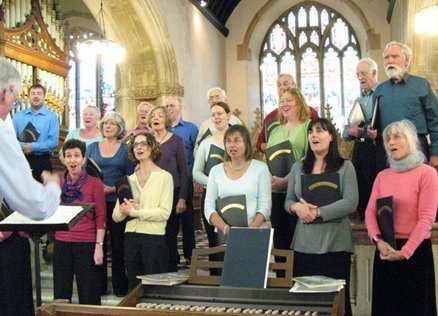 The Music of William Byrd and his Contemporaries

The first half was devoted to the music of William Byrd, the leading Tudor composer of his day.  A varied selection of shorter pieces showed his ability in all forms of composition.  His Sanctus and Benedictus was truly atmospheric and the Agnus Dei was sung with great delicacy.  The Justorum Animae was a beautiful work given full justice by the choir.

There was lighter fare after the interval with madrigals and ballads by Thomas Morley, Thomas Weelkes and Robert Pearsall.  A mixture of pieces showing both cheerfulness and sadness in equal measure was sung with great verve and sensitivity.

On this evidence the Bristol Chamber Choir fully deserves its reputation as one of the finest in its field. An appreciative audience had been well rewarded with an outstanding concert.

The next concert of Chipping Sodbury Music Society’s 68th Season, in the Town Hall at 7.30 pm on 8 March 2016, will be given by the Marylebone Trio, a classical woodwind trio formed in 2003 by postgraduate students at the Royal Academy of Music.  Further information may be found on our website at http://www.csmusicsociety.co.uk

Led by percussionist and lead vocalist Debbie Arthurs, Sweet Rhythm played more than twenty numbers to a packed audience. Debbie has a lovely, clear voice and it was a joy to hear her singing songs that transported us back to the Art Deco era, as well as performing solos on alto and tenor saxophone.  The soloists all attracted spontaneous applause, a testament to their consummate musicianship; amongst them Roger Heeley for his piano solo in Duke Ellington’s “Mood Indigo” and James Agg on double bass in Gershwin’s “Lady be Good”.

Neil Ions, with his inimitable style as a percussionist (and the memorable hat) also stepped up to the microphone; his playing captivated the audience particularly when the conga drums made their appearance.  Gary Wood (and his shiny shoes) on trumpet has to be commended for his great skill, particularly in the up-tempo number “Swing that Music”.

One of the highlights of the evening was the wonderful song “I Almost Lost my Mind” made famous by Ivory Jo Hunter;  after the final number the audience demanded an encore and were rewarded with an invitation to sing along to “When You’re Smiling”.

Thank you to RichMcD Photography who took a stunning set of photographs of the band.  We are also extremely grateful to all the local businesses who generously donated prizes for our very successful raffle. 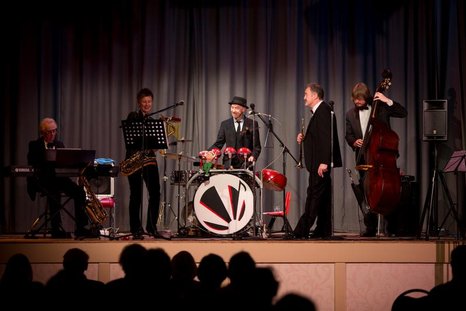 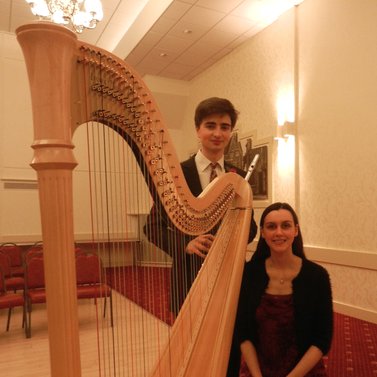 The ‘Histoire du Tango’ by Piazzolla provided a lively opening.  An Intermezzo by Andriessen, a richly sonorous work, followed.  Debussy’s ‘Syrinx’, arranged for solo flute, was an evocative piece. The ‘Sonata for Flute and Harp’ by Bax, a substantial work, taxed both instruments to the full.  An attractive Irish folk tune was woven into the first and last movements.  After the interval variations on ‘Early Morning’ was a delightful, real showcase for flute and harp.

In Fauré’s ‘Une chatêlaine en sa tour’ for solo harp a restful and serene atmosphere prevailed.  Saxton’s tone poem King Herla, commissioned specially by the Duo in 2013, is based on a legendary King of the Britons and encompasses many different moods.  An alto flute and piccolo added variety to this interesting work.  Borne’s ‘Fantaisie brillante sûr Carmen’, with all the familiar tunes played with great gusto, gave a rousing finale to a concert of impeccable playing by two young artists already making their mark in the world of classical music.

As one member of the audience wrote to us after this performance, “I just had to write to say how much I enjoyed the breathtakingly beautiful concert played by the Antara Duo.  Rachel and Thomas played with outstanding flair and accuracy and were utterly spellbinding.  Their sheer brilliance shone through every note in every bar of every piece.”

The welcome return of the Roaring Fork Wind Quintet got the Chipping Sodbury Music Society 2015-2016 season off to a flying start.

‘Dance to your Daddy’ arranged by Ian Harrold was a humorous piece with a Gallic flavour. The substantial Quintet by ‘Taffanel’ gave the flautist a particularly rewarding role. The Suite by Norman Hallam based on various dance forms was played with great enthusiasm and the Charleston in particular must have tempted the audience to dance in the aisles.

Shostakovich, normally a composer of serious music, let his hair down with his ‘Tahiti Trot’ based on the tune ‘Tea for Two’.  Ibert’s ‘Three Brief Pieces’ were a delight.  The andante featured interplay between flute and oboe, both played with great delicacy. The finale was full of memorable themes. Jim Parker’s ‘Boulevard’, a street scene in sound, had echoes of Stravinsky and received playing of obvious affection.  Several members of the audience were (almost) moved to tears by the section ‘Death of an organ grinder’, represented by gasps from the horn.

In response to enthusiastic applause the audience was treated to a lively encore titled ‘Rikudim’, an Israeli dance tune which brought a well balanced programme to a satisfying end. 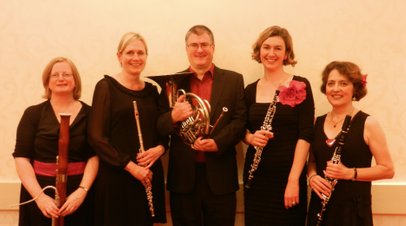