"A Flourish of Trumpets"

The first concert of Chipping Sodbury Music Society’s 2016/7 season got off to a great start with Bella Tromba – 4 girls with 4 trumpets.  Music ranging from 1695 to 2010 provided plenty of variety.

Henry Purcell’s ‘Music for the Funeral of Queen Mary’ conjured up visions of the cortège moving slowly towards Westminster Abbey.  John Reeman’s ‘The Armed Man’ posed many technical challenges, surmounted by the players with apparent ease.

Favourite tunes from Bizet’s ‘Carmen’ were played with great verve and obvious affection.  Stravinsky’s ‘Le Cinq Doight’, originally written for piano, bore all the trademarks of this composer.  The playing was crisp and purposeful with echoes of ‘The Firebird’ never far away.

A jazz arrangement of Tchaikovsky’s ‘Dance of the Flowers’ proved a real tour de force of which I am sure the composer himself would have approved.

Arrangements of popular songs ‘Fly Me To The Moon’, ‘My Funny Valentine’ and an encore, ‘Singing In The Rain’, complete with raincoats and umbrella, proved a satisfying finale to a well-received concert in which different types of trumpets (Bass, Bb, Piccolo and Flugel horn) had been deployed. 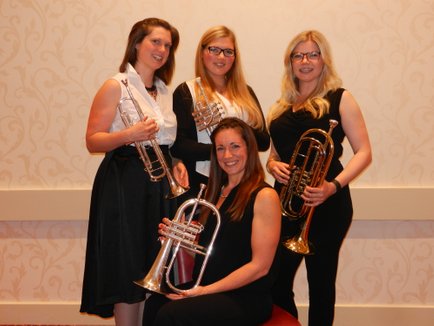 Haydn’s charming String Quartet Opus 64 No 64 got the programme off to a fine start.  The lively first movement was played at an ideal tempo and the graceful Minuet, with its intricate trio, received a sympathetic response.  The Adagio was full of pathos and the humorous last movement was given a joyful touch.

The ever popular “American” Quartet by Dvorak seemed highly appropriate on the eve of the Presidential Election.  This tuneful work was played with obvious affection.  The atmospheric opening Allegro showed real passion, the beautiful slow movement a rare intensity and the final Rondo true happiness.

Borodin’s delightful Quartet No 2 was written as a token of love to his wife.  In the opening Allegro the romantic overtones were well delineated, the Scherzo was played with utter concentration and the ever popular Notturno was given full measure.  The boisterous Finale brought the work to a satisfying conclusion.

So ended a memorable concert given by dedicated players and enjoyed by all.  In addition to the beautiful music the audience was treated to an explanation of the instruments being played.  Each of them was clearly treasured by its owner but two of them deserve special mention.  Kirsten’s violin was made for her about four years ago by Leominster-based violin maker John Langstaffe, who came to the concert to hear it being played.  By contrast, Richard’s viola was made by Nathaniel Cross (1686-1751) in his workshop next to the George Inn in Aldersgate, London where he worked from 1739.  How apt that this very valuable instrument should have been played on Tuesday evening next door to The George in Broad Street!

The opening number was the Benny Goodman version of “Sing, Sing, Sing” before the audience was introduced to Clara, whose compelling voice was perfectly suited to “It Don’t Mean a Thing...”.  The first set included a couple of Stan Kenton’s numbers from his 1961 “A Merry Christmas” album, featuring trumpets and saxophones in classically influenced style.  Memorable, too, was Clara’s rendition of the George and Ira Gershwin number “Someone to Watch Over Me”, where she fronted the accomplished rhythm section; a beautiful American classic, beautifully sung.  Woody Herman’s “Woodchopper’s Ball”, his first hit on the Decca label (eventually selling more than five million copies) ended the first half and featured Simon Marsh on clarinet.

Tom Kubis’s musical arrangements define the contemporary big band sound and his version of “Joy to the World” provided the rousing opening to the second half, featuring Simon Marsh again, this time on soprano saxophone.  This was followed by Clara singing “Let It Snow! Let It Snow! Let It Snow!” with Berry Goddard on tenor saxophone.  Nick Malcolm, on trumpet, gave us more Christmas cheer with “It came upon a Midnight Clear” and the trombones delivered “Adeste Fideles”, translated from Latin as “O Come, All Ye Faithful”.  The second set concluded with “Deck the Halls”, to supposedly send the audience on their way.  However, the loud applause and standing ovation led to an encore “Oh Holy Night”.

No review would be complete without a thank you to everyone who contributed to the success of the evening.  We are extremely grateful to the local retailers and members of the Chipping Sodbury Music Society who generously donated prizes for the raffle, the proceeds of which will enable us to continue putting on live music events of such high quality in the town.  We also had not one but two photographers who recorded the whole event for us, Rich McD and also Alex Millichamp from AIM Photos.  Adam Greenslade performed his usual magic with the lighting effects and the Town Hall staff once again looked after us admirably. 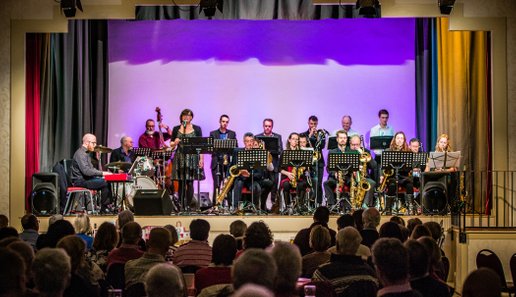 The February concert of the Chipping Sodbury Music Society featured Ivo Varbanov and Fiammetta Tarli, one piano four hands. “A Romantic Journey at the Piano” was the apt title for Valentine’s Day.

Schubert’s “Fantasie” is probably the finest work ever composed for four hands and came at the very end of his tragically short life.  The haunting opening, taken at a measured tempo, was breathtakingly beautiful and the stormier moments were attacked with rare passion.

An arrangement of Brahms’ “Love Song Waltzes”, based on German traditional folksongs, were well varied and the moods were expressed with great finesse.  Echoes of his familiar Hungarian Dances were never far away.

Faure’s “Dolly Suite” proved a relaxed and tuneful end to the concert.  Played with obvious affection the well-known “Berceuse” was shaped with sensitivity and the final “Pas Espagnol” shimmered and sparkled.

The international status of the artists is well deserved. 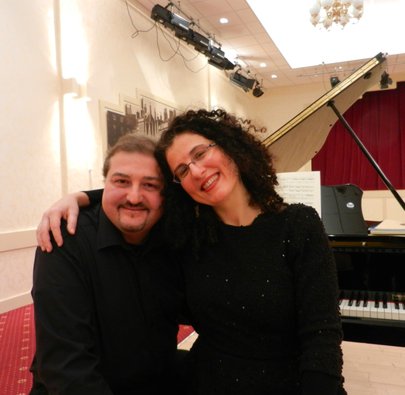 An Evening with the Oboe Family

“An Evening with the Oboe Family” was the title of the Chipping Sodbury Music Society March concert. The Reed Warblers Oboe Quartet, Christine Griggs, Janet Hopkins, Sarah Lindon and Alison Slater treated the audience to arrangements of music ranging from Henry Purcell born 1659 to Bruce Broughton born 1945, played on no less than ten instruments including two very rare bass oboes.

The wind trio of Joseph Triebensee, a little known Austrian composer of the early 19th century, proved an interesting work with many opportunities for the players to shine.

The UK Premiere of Bruce Broughtons music for oboes, a modern work, had a light-hearted and bouncy first movement and a finale full of quotes from other works. Arrangements of well known nursery rhymes by Christopher Weait proved a real hit, enjoyed by players and audience alike.

The final item, the final movement from Dvorak’s American Suite captured its open air spirit. The unique soundstage provided by the oboe family was well received by an appreciative audience. 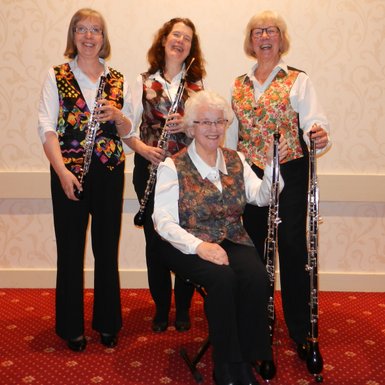 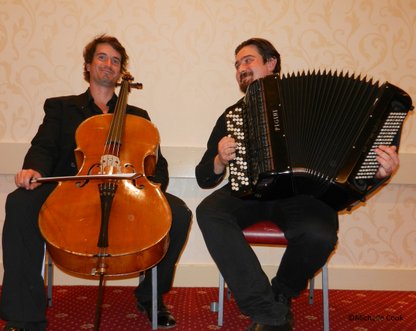 Sponsored by the Countess of Munster Musical Trust, Bartosz Glowacki - accordion and Corentin Chassard - cello presented an unusual combination of instruments at the April concert of the Chipping Sodbury Music Society.

There were many lighter items. Arrangements of two of Scarlatti’s contrasting piano sonatas were played with great delicacy in the first of these and precise articulation in the second. A transcription of Schubert’s love song “Softly Through the Night is Calling” was delightfully realised.

Bach’s “Cello Suite No 1 Allemande and Currante” was technically and artistically assured. The adagio from  Marcello’s “Oboe Concerto” was performed with a gentle touch and the first movement of Vivaldi’s “Cello Sonata No 6” responded well to an unexpectedly up-tempo rendition.

Bloch’s “Prayer from a Jewish Life” was played with rapt concentration and a “Macedonian Folk Song” made a fine impression in instrumental form. Two rhythmic South American pieces by Bandolim and Piazzola ended the evening in rousing fashion. Both players had clearly shown mastery of their trade and their supreme musicianship was highly praised by members of the audience after the concert.

"The Future of Music is alive and well"

A Concert by Young Musicians from South Glouicestershire Schools

The future of music in this country is alive and well. To celebrate the final concert of its 2016 season the Chipping Sodbury Music Society welcomed young musicians from the South Gloucestershire Music Hub. This organisation enables young pupils at local schools to involve themselves in the very widest range of music making.

The first half of the programme featured groups at the intermediate stage of achievement. Second Wind brought out the pathos of the song “What a Wonderful World” to great effect. Intermediate Flutissimo coped well with the staccato effects of Michael Jackson’s “Smooth Criminal”. Open and Crossing Strings gave a gentle and affectionate rendition of Vivaldi’s “Village Dance” and Blackwell’s “Barrier Reef”.

The second half was given by the more advanced players. The South Gloucestershire Youth String Orchestra played Nordic compositions by Hansen and Sibelius with rapt concentration, capturing the beauty and stillness of the music. The Kingswood Senior Guitars, already booked to play at the CBSO Centre as part of the National Festival of Music for Youth  later this year, excelled with their playing of Satie’s “Gymnopedie No 1” a truly hypnotic piece.

The programme ended with the South Gloucestershire Youth Wind Orchestra. Their confident big band sound was contrasted with some exceptional flute playing during “Awakening Hills” by Richard Saucedo.

This was truly an evening to remember and special thanks must go to the various conductors and to Richard Jones, Music and Arts Strategy Manager.

And now, after such a brilliant end to its 69th season, the Society moves forward to celebrate its Platinum Anniversary with some outstanding performers. 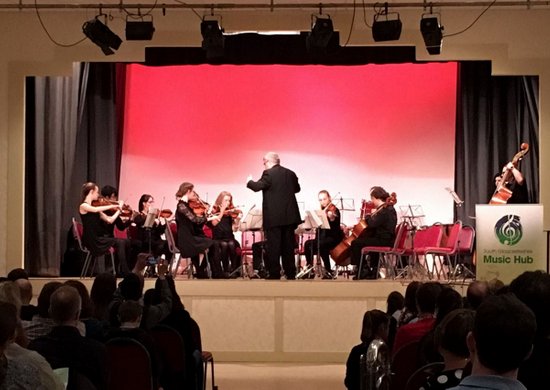