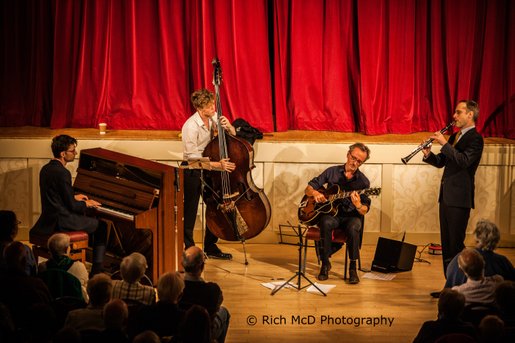 "Vintage jazz at its best "

This was our extra, jazz concert that was arranged before, but not as part of our regular season; as we did last year with Jacqui Dankworth.

The band, brilliantly led by Andrew Oliver on piano, also featured David Horniblow on clarinet, Tom Wheatley on bass and Dave Kelbie on rhythm guitar.  The hall was packed to hear them play two sets of music by Jelly Roll Morton, WC Handy, Jimmie Noone, Duke Ellington and other greats of the jazz world.  Unforgettable too were the two compositions by Andrew Oliver himself: The band’s adopted theme tune “Ten Cent Rhythm” and “Otis Stomp”, named after the small town Otis in Oregon where Andrew grew up.  An interesting fact we learned from him was that a dime is 10 cents, but a dime note is 10 dollars. 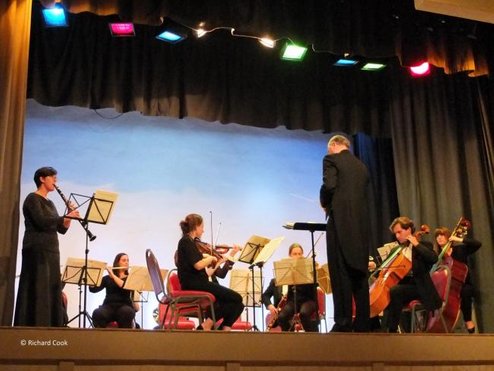 An audience of over 100 welcomed the return of the Amadeus Orchestra, under its Director Philip Mackenzie and ably led by Madeleine Pickering, to celebrate the 70th birthday of the Chipping Sodbury Music Society.

What an enjoyable October concert it proved to be.

Handel’s Arrival of the Queen of Sheba is a work that many orchestras rush through. The Amadeus by contrast took a relaxed tempo with pointed rhythms and excellent balance between woodwind and strings.

Mozart’s Clarinet Concerto was his final major instrumental work before his untimely death. Claire King, the talented soloist, gave a lively account of the first movement with firm tone projection and secure intonation.

The sublime slow movement received a truly rapt performance with the air of resignation and sadness perfectly captured. An excellent rapport between soloist and orchestra ensured a rousing finale.

The final piece Handel’s Water Music included both familiar and unfamiliar items. Initially the louder fanfare moments revealed the lack of weight of a larger orchestra.

However the ear quickly compensated and the reduced forces of the Amadeus paid handsome dividends with greater clarity and sensitivity. The brass challenges were bravely surmounted and King George the First would have been well satisfied with this performance.

The evening ended with many curtain calls and an exhilarating encore of well known Scottish airs in the manner of Mozart. As ever the Amadeus had excelled itself and given the Music Society a memorable 70th birthday present.

The first movement had a delightfully airy feel, the adagio was played with great feeling and the more substantial finale revealed excellent coordination between the artists.

Johann Sebastian Bach’s solo Cello Suite No.3, transposed for viola, is a demanding work. It was triumphantly realised totally from memory.

George Enescu is a Romanian composer much influenced by folk music. His Konzertstuck for viola and piano is a passionate work which exploits the full range of the viola. Both players brought a rare intensity of attack to this piece.

The final composition, Johannes Brahms Sonata Op.120 No.1 brought a satisfying conclusion to the concert. The dramatic opening allegro was played with great spirit, the elegant songful andante encouraged delightful interplay between viola and piano and the final vivace was pressed home with great vigour.

The audience showed great appreciation for an evening of sustained musical excellence. 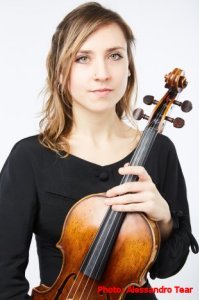 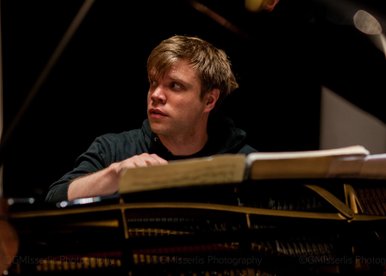 The December concert of the Chipping Sodbury Music Society had a decidedly festive air. JOGLARESA, a widely acclaimed ensemble which specialises in Early Music, gave a fascinating programme with a medieval flavour.

Belinda Sykes, director, Lea Cornthwaite, Louise Anne Duggan, Angela Hicks, and May Robertson, ably performed on an amazing range of instruments including an early form of bagpipe, frame drums, gittern, percussion, dulcimer, harp and fidel and great voices from everyone.

Though the words of old carols have been handed on through the generations few examples of the original music exist. Belinda Sykes has filled this void with compositions which fit both words and sentiments. The singing was of a consistently high standard with voices well blended and sensitive to the medieval texts.

In such a generously filled programme it is impossible to do full justice to the many items performed. Highlights included THE KILLER RABBIT about a man who choked on rabbit bones, THE COVENTRY CAROL a charming piece played with great feeling, VERBUN BONUM/VINUM BONUM a parody where the good word becomes good wine, and finally two well-known carols OH COME OH COME EMMANUEL and DING DONG MERRILY ON HIGH both given a rousing rendition.

This unusual and memorable concert was enjoyed by a large and enthusiastic audience, 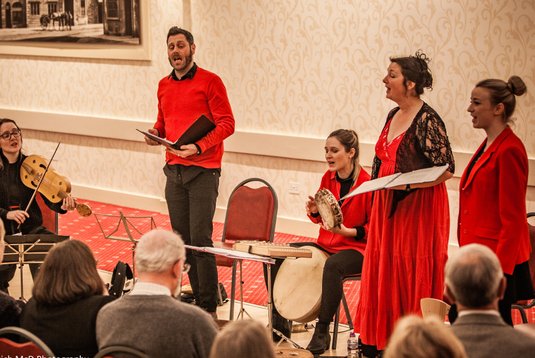 The February concert of the Chipping Sodbury Music Society  welcomed the return of 4girls 4harps Eleanor Turner,Harriet Adie,Keziah Thomas, and Elizabeth Green. The overall theme was dance with music from Germany,France,Armenia,Russia,Spain,and Argentina.

The sorrow and joy in excerpts from Khachaturians Masquerade Suite were well captured. Borodins Polotsvian Dances showed both poise and concentration. Prokofievs March of the Montagues and Capulets from Romeo and Juliet was played with great aplomb and Debussys Claire de Lune responded well to a romantic treatment.

The concert ended with Manuel De Fallas Ritual Fire Dance. This technically difficult work was carried off splendidly and provided a perfect conclusion to a highly successful concert enjoyed by a large and enthusiastic audience. A Shostakovich encore was a surprise bonus.

"Thank you so much for a really lovely day yesterday. We were so pleased to be invited back for your 70th Anniversary year and enjoyed the concert and the audience reaction immensely.

Thank you so much for your hospitality, help and the beautiful roses.

From Keziah, Harriet, Lizzy and Eleanor" 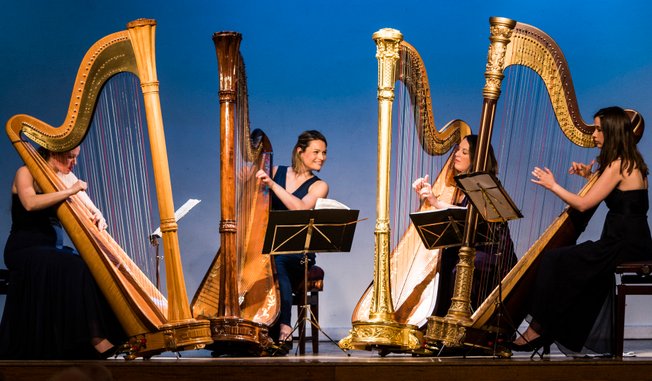 Polished Performance from the Marylebone Trio

The March concert of the Chipping Sodbury Music Society saw the return of The Marylebone Trio featuring Jemma Bausor oboe, Helen Pierce clarinet, and Alexandra Davidson bassoon. A varied programme ranged from the classical era to the present day.

An arrangement of largo al factotum from Rossini’s Barber of Seville got the concert off to a lively start. Mozart’s Divertimento no.3 with its perky minuet and jolly rondo, revealed the fine interplay between instruments. A solo bassoon transcription of Bach’s Courante from his cello suite no.3 proved a real tour de force. Beethoven’s Trio for woodwind is a substantial work and was given a performance with a deeply felt adagio and rollicking finale.

Haydn was an essentially cheerful composer and his London Trio no.3 was no exception. Benjamin Britten’s Pan for solo oboe is a haunting work with many technical demands all met with great aplomb. A Divertimento by the Hungarian composer Endre Szekely proved challenging. Gaillard’s Allegro for solo clarinet was a melodious composition from the 18th century.

The final item was Alan Dawson’s Three Winds in a Boat, a humorous arrangement of well-known sea shanties which made a satisfying end to a well-received concert. An encore, Debussy’s Golliwog Cakewalk was enchanting if somewhat politically incorrect. 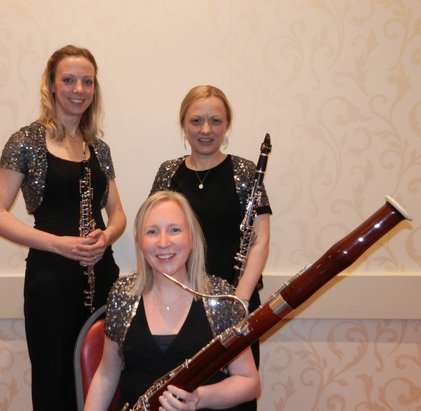 The second half included arrangements of popular children’s songs. London Bridge fell down most convincingly. The artists were completely at home in two Dave Brubeck compositions and a Chopin encore was the icing on the cake.

A truly delightful evening had been enjoyed by all.

"I want to thank you once again for making our first visit to the Chipping Sodbury Music Society such an enjoyable experience last night.  The hall set-up, piano and general ambiance were impeccable.. . . . It goes without saying that we would love to return sometime" 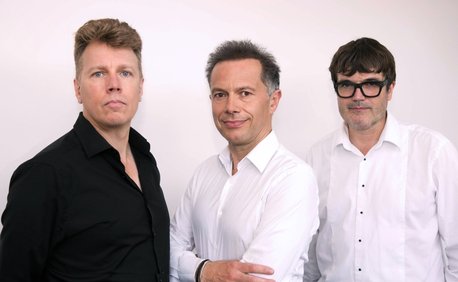 A programme to suit all tastes opened with a Leroy Anderson favourite “The Typewriter”. Simon Mayor’s “Taxi Horn Rag”, inspired by a massive traffic jam he experienced in central London, touched many a raw nerve in the audience. Irving Berlin’s song “Bluebirds” was beautifully captured by Hilary James.

Richard Collins poem “The Stick” was a nostalgic reminder of a walk in the Yorkshire Dales; the charming Buttermere Waltz by Simon Mayor came from a similar experience. A mandolin and banjo duet was fast and furious and really good fun. Classical pieces by Bizet, Dvorak, Grieg and Vivaldi were given full measure.

The audience sang with great gusto the choruses from the infamous “Spider in the Shed”. Everyone had warmed to the infectious banter, good humour and technical excellence of the group. It had been a memorable evening.

"Many thanks to all at Chipping Sodbury Music Society for another warm welcome and a very enjoyable evening in your company.

I hope the club thrives into it’s 8th decade and if our fingers and voices survive we’d love to play for your 100th birthday celebration! 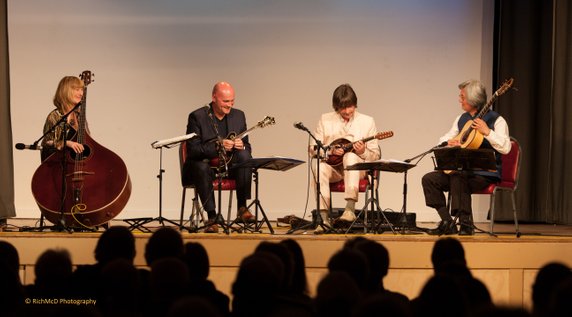 800 Years of Music and Chipping Sodbury

Chipping Sodbury Music Society organised this evening of medieval, folk and world music celebrating the 800th anniversary of the granting of the Market Charter to the town.

The widely acclaimed ensemble, Joglaresa, made a welcome return to the town performing English, Spanish and French music from the 11th to 14th centuries – just the right style of music to evoke the atmosphere of Chipping Sodbury during that period of history.  Director of Joglaresa, Belinda Sykes - voice, bagpipes was joined by Cerian Holland - voice, harp, May Robertson - fidel, voice, Guy Schalom - percussion, voice and two new members of the group Elisabeth Flett - fidel, voice and Elsa Bradley - percussion, dulcimer.

The audience enjoyed listening to ballads of illicit love and villainous seducers, subversive medieval re-workings of hymns by errant monks and songs about a killer rabbit and a donkey (in celebration of the Feast of the Ass) as well as Belinda’s lively comments throughout the evening. The whole programme was delivered with Joglaresa's inimitable energy, irrepressible cheeriness, rebellion and, above all, FUN! 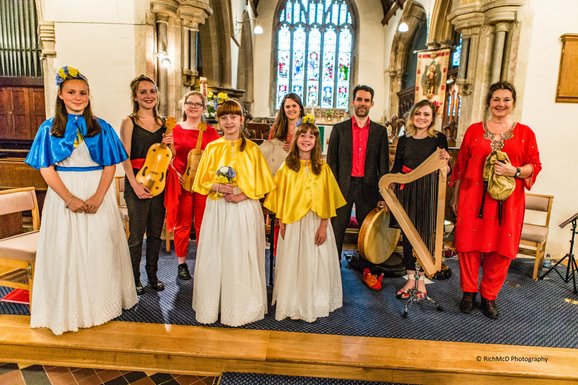