"A Night to Remember with

Led by percussionist and lead vocalist Debbie Arthurs, who was a founder member of the band 25 years ago, (hard to believe!) the Charleston Chasers played no fewer than twenty four numbers to a jam-packed audience. Debbie has a lovely, clear voice and it was a joy to hear her singing songs that transported us back to the Art Deco era.  The soloists all attracted spontaneous applause, a testament to their consummate musicianship; amongst them Andy Flaxman for his trombone solo “Lazy Bones” and Ruth Ross on trumpet and vocals.

Martin Wheatley joined the band in 1997 and is now their regular banjoist/guitarist and also stepped up to the microphone several times; although hidden away at the back of the stage for much of the programme, his playing captivated the audience.

The Saxophone solo “Oodles of Noodles”, a Jimmy Dorsey number played by Nick White, has to be commended.  It must surely be one of the most difficult pieces in the saxophone repertoire and was performed with great skill.

As the Music Society had bid a fond farewell to its Steinway grand piano over the summer, pianist Colin Good literally took to the floor of the auditorium to play the Town Hall piano, providing superb accompaniment throughout the evening as well as playing several solos himself.

The second half began with a surprise for the audience – a small marching band entered from the back of the hall and joined their colleagues on stage playing “When the Saints”.  The evening flew by and after the final number the audience demanded an encore and were rewarded with “The Clouds Will Soon Roll By”.

Thank you to Tony Hodges for creating the subtle lighting effects which provided just the right atmosphere throughout the evening, and to Rich McD who took a stunning set of photographs of the band.  We are also extremely grateful to all the local businesses who generously donated prizes for our very successful raffle.

This was undoubtedly one of the most memorable concerts in recent times and was enjoyed by all. 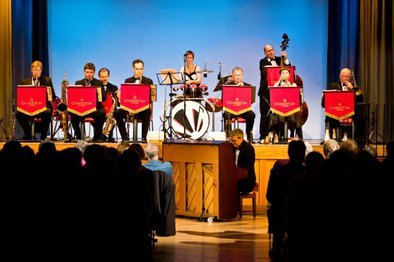 November saw the welcome return of the Russian born pianist Sophia Lisovskaya who gave such a memorable concert two years ago. A Scarlatti sonata got the programme off to a sparkling start; the delicacy of her playing brought to mind a harpsichord, for which this work was originally written.

Mozart’s piano sonata no.12 received exceptional clarity. The humour in the first movement was well brought out and the heartrending pathos of the slow movement was beautifully realised. A feast of Chopin followed. Nocturne no.1 was played with a well judged use of rubato (flexibility of tempo in performance) and Nocturne no.20 full of sadness and uncertainty with rapt concentration. Scherzo no.2, a technically difficult work, was given an exceptionally vivid performance and the many contrasting moods were captured to perfection.

Two short preludes by Rachmaninov were given a passionate treatment but the underlying feeling of tragedy was sustained throughout. Excerpts from Tchaikovsky’s The Seasons were clearly relished. February’s festive carnival was carried off with great aplomb, the melodic barcarolle from June was sweetly done and December’s Christmas music was a vivid reminder of his ballet music.

A Scriabin encore proved a real tour de force. Once again the enthusiastic audience had been rewarded with an evening of piano playing of the highest order. 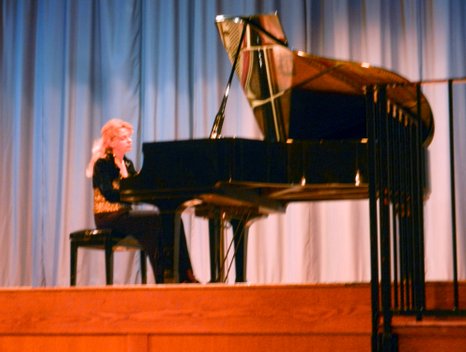 January’s audience was taken on a whirlwind world tour

by the locally based Wessex Clarinet Quartet.

Clare King, David Mackenzie, Julia Holmes and Simon Parker showed that this unusual grouping of instruments could shine in all types of music.

England was represented by Gordon Jacobs’ Scherzetto Pavane and Gopak played with crisp articulation. Gilbert and Sullivan’s excerpts from The Gondoliers and The Mikado were given rhythmic poise and commendable clarity. French composer Dubois wrote specially for clarinet quartets and his music proved full of Gallic wit. 3 tangos from Argentina by Piazolla enjoyed a highly successful arrangement in which pathos and delicacy were unusually present. Bulgarian Back Bite, an hypnotic piece, showed a strong Eastern influence.

Popular numbers from Kurt Weill’s Threepenny Opera were Germany’s contribution and the decadent nature of the music was well captured. Glasgow born Edward Maguire’s Celtic Knotwork, based on medieval rhythms, was strangely hypnotic. George Gershwin was a natural choice as America’s champion Swinging, foot tapping renderings of Lady be Good and Somebody Loves Me were hugely enjoyed. The final item was from Russia. Rimsky Korsakov’s Dance Of The Tumblers; the peculiarly Slavic nature of the work was beautifully realised.

Rapturous applause at the close was a measure of how successful the concert had been. 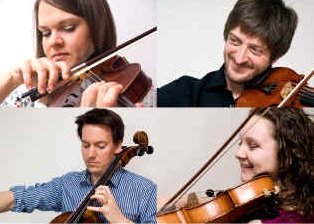 The local Ardeton Ensemble made a welcome appearance for the third time at the February concert. The four talented string players with a passion for chamber music, Sarah Eales, Jon Cowell, Rachel Clennell and Dury Loveridge gave a varied yet substantial programme at the Town Hall.

Mendelssohn’s String Quartet no. 2, written when the composer was only 18 years old, was a homage to Beethoven who had died earlier that year. The chorale-like first movement received a high level of intensity, the slow movement was vigorously treated, the melancholy intermezzo was beautifully realised by the first violin and the fairylike scherzo proved reminiscent of a Midsummer Night’s Dream composed a year earlier. The final movement was taken at a headlong pace until its restful close.

Puccini is best known for his operas and wrote very little chamber music. His string quartet Chrysanthemums was written in a single night in 1890. This brief romantic work was a real find.

Anton Arensky’s music failed to make an impact during his short lifetime and is not well known today. Influenced by his mentor Tchaikovsky his works are melodious and well constructed and deserve much wider appreciation. An example is his String Quartet of 1895. The sombre opening showed a strong Russian flavour, the elaborate theme and variations were played with fine understanding and the fast and furious finale was despatched with great brio.

Dury Loveridge’s variations on Tchaikovsky’s Morning Prayer showed off the character of each instrument to perfection. Played with obvious affection this work did full justice to the original composition.

A humorous tango by Stravinsky proved an ideal encore to a concert hugely enjoyed by an appreciative audience.

As promised in my last review we enjoyed more viola, which is often regarded as the Cinderella of the orchestra string section. As a chamber instrument, however, its richness and depth of tone can make it a star performer. This was certainly the case at the March concert in the Town Hall. Shiry Rashkovsky viola and Alison Rhind piano, both artists sponsored by the Countess of Munster Musical Trust, showed complete mastery of their instruments'

Rebecca Clarke’s viola sonata was composed in 1919 and proved a satisfying opening work. The faster movements were played with passion and the adagio was given a soulful delicacy. Henri Vieuxtemps’ Homage to Paganini exploited the viola’s range to the full; Joseph Jongens Allegro Appassionata was an exciting short piece well projected by the soloists.

The major work in the second half was Shostakovich’s very last work, his sonata for viola and piano. Its brooding and introspective qualities were realised to perfection. The Concertstuck by George Enescu ended the evening on a happier note. On this evidence music is alive and well. 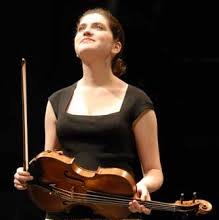 "An Evening with the Roaring Fork"

The musical journey moved to 20th century France with an arrangement for wind quintet by Mason Jones of Maurice Ravel’s “Le Tombeau de Couperin”.  The secret of the origin of the Quintet’s name was then revealed when they played the “Roaring Fork Quintet” by Eric Ewazen.  Performed with skill and sensitivity, the three movements drew the audience to the scenery of the rapids, lakes and mountain passes of the Rockies.

After the interval the Quintet played a breath-taking arrangement of Astor Piazzolla’s “Libertango”.  This piece breaks away from the traditional Argentinian Tango style and the oboe was the perfect medium for delivery of this well-known tune.  A complete contrast was provided by Gloucestershire composer Laura Kane’s “Wind Quintet No. 2”; she created two lively Allegro movements separated by a moving and expressive Lento, beautifully executed by the group.

The last stop of the tour was in New Orleans with “Mississippi Five” by Jim Parker. This showcased the characteristics of the individual instruments with tributes to several of the Jazz and Blues “greats” and a last movement entitled “The Farmyard”, packed with hugely entertaining animal noises.  Needless to say, the audience demanded an encore and were rewarded with “La Comparsa (Carnival Procession from Afro-Cuban Dances)” by Ernesto Lecuona – a fitting end to a delightful journey.

"Fiesta of voice and guitar!"

The final concert of the Chipping Sodbury Music Society 2013-2014 season featured Karina Lucas mezzo soprano and Rory Russell guitar. Four works from the Baroque Era by Gluck, Erlebach and Handel were well projected with good control of rhythm, and the well known Handel aria “Let Me Weep” with its touching melody was phrased with great care by both players.

Dowland’s “Lute Songs” were presented with clear diction and Britten’s selection of songs from different parts of Britain were well characterised. A guitar solo of traditional Celtic pieces including the nostalgic “Skye Boat Song” was played with great feeling and the wide range of the guitar was well deployed.

The second half of the programme was devoted to Spanish music by Lorca, Albeniz and De Falla. Two guitar solos from “Suite Espagnola” by Albeniz interposed the songs and Rory Russell demonstrated a delicate touch in the slower music. The vocal pieces were sung with great panache by Karina Lucas, a reflection perhaps of her part Spanish parentage. The many moods of the De Falla songs were well captured and the final song titled “Polo” brought tumultuous applause from an audience which had enjoyed an evening of fine music making. 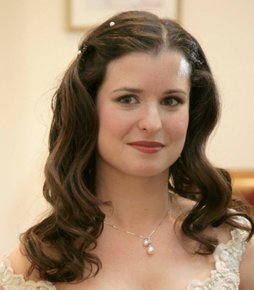 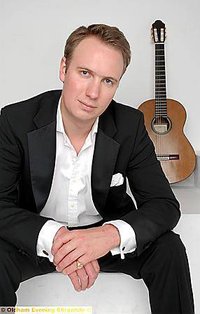