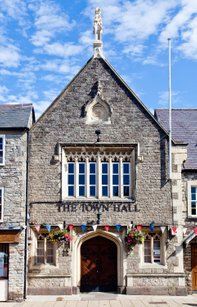 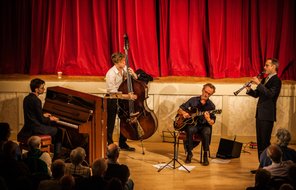 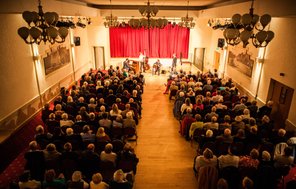 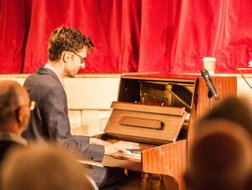 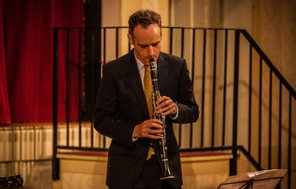 Vintage jazz at its best with The Dime Notes

The band, brilliantly led by Andrew Oliver on piano, also featured David Horniblow on clarinet, Tom Wheatley on bass and Dave Kelbie on rhythm guitar.  The hall was packed to hear them play two sets of music by Jelly Roll Morton, WC Handy, Jimmie Noone, Duke Ellington and other greats of the jazz world.  Unforgettable too were the two compositions by Andrew Oliver himself: The band’s adopted theme tune “Ten Cent Rhythm” and “Otis Stomp”, named after the small town Otis in Oregon where Andrew grew up.  An interesting fact we learned from him was that a dime is 10 cents, but a dime- note is 10 dollars.

A huge thank you to:

The Management Team and Lighting Technician 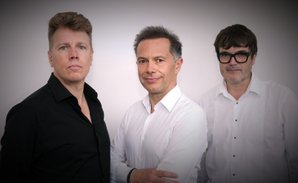 Dominic Alldis has built a unique musical career over 30 years, spanning the rich and varied musical worlds of classical music, jazz piano and cabaret singing. Equally at home with a conductor’s baton in hand, performing with his jazz trio or entertaining an audience with songs at the piano, Dominic’s fluency in many different musical languages and flair for bringing them together in a distinctive way puts him in a category all of his own.

Andrew Cleyndert has toured with bands led by many of the major figures of British and American jazz, including Bobby Wellins, Don Weller, Red Rodney, Bud Shank, Gene Harris and Annie Ross. In the early 90s he become a member of the Ronnie Scott Quartet and until his recent death was bassist in the groups of British jazz legend Stan Tracey. Andrew and Dominic have been performing together in numerous ensembles since 1985.

Andrew Cleyndert has been nominated for the 2017 British Jazz Awards in the Double Bass category.  Congratulations on being awarded 4th Place this year.

Martin France has played with many of the world's finest jazz musicians in over forty countries worldwide. A turning point in his early career was his role within the Eighties big band Loose Tubes, where he began a longstanding partnership with many of its members, in particular jazz composer and pianist Django Bates. Martin has performed and recorded with Elvis Costello, David Gilmour, John Taylor, Kenny Wheeler, Dave Holland and Lee Konitz. 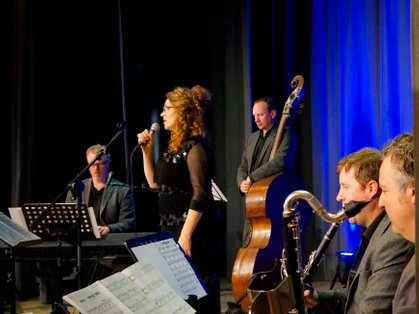 "Shakespeare and All That Jazz"

A packed Chipping Sodbury Town Hall was treated to “one of the most beautiful concerts in the Town Hall for 20 years” said Harry Rae after “Shakespeare and all That Jazz” with Jacqui Dankworth and Friends on Friday 30 September. Another member of the audience wrote afterwards “The whole concert was fantastic. Jacqui has such a wonderful voice and, of course, her band are wonderful musicians; with such a programme of memorable and less well known Shakespeare it was a perfect evening. We are so fortunate that the Chipping Sodbury Music Society team were prepared to work so hard to bring them to Chipping Sodbury.”

Jacqui, who is also a seasoned actress having studied at the Guildhall School Of Music And Drama, paid homage to her parents in a reincarnation of the material composed by her father Sir John Dankworth for her mother Dame Cleo Laine. The arrangements included settings such as “All the World’s a Stage”, “Shall I Compare Thee to a Summer’s Day”, “O Mistress Mine”, the story of “Macbeth”, a comical setting of Shakespeare’s complete works and much more!

The audience was introduced to all Jacqui’s friends on stage. Julian Siegel, best known as a saxophonist, is a classically trained multi-instrumentalist who plays most reed instruments; his special treat for the audience was his brilliance on the bass clarinet. He was joined by a surprise guest, Ben Castle, on clarinet and saxophone. After the interval Jacqui rewarded the curiosity of the audience with the information that Ben is the son of famous British TV personality and jazz trumpeter Roy Castle. His subsequent little tap dance under his music stand was priceless. Oli Hayhurst has been one of the busiest bass players on the London jazz scene since graduating from the Royal Academy of Music in 2000. He is a really positive, pro-active bassist who played a crucial part in leading the melody and setting the mood. Jacqui’s husband, Memphis-born blues keyboardist Charlie Wood, accompanied the sets on keyboard, demonstrating his dextrous, jazz and blues influenced piano playing. He also sang two numbers in his gentle and persuasive voice and contributed to the arrangements.

Thanks are due to the Town Hall team, the bar staff from Wards, the sound crew from King Sound, Adam Greenslade whose lighting schemes complemented the moods of the evening, Paul Whittle who took the official photographs and everyone else who generously helped with publicity and ticket sales.

What more can we say about Jacqui Dankworth, except that she is the perfect exponent of the classic Shakespearian ballads. She has a beautiful voice and a deep understanding of her material. The visitors from Aylesbury, who had been following her tour around the country, and all the other members of the audience from near and far, were fortunate to be present for such an enthralling performance.